I recently read Divergent, a novel written by Veronica Roth (2011). 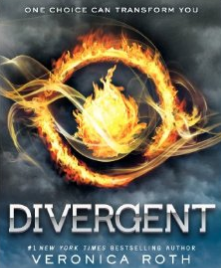 The book was brought to my attention by both Moe (my lovely bride of 37 years) and my daughters.

Heroine Beatrice (Tris) Prior navigates the transition from childhood to adulthood in this adolescent fiction.  The story is set in a post-apocalyptic American urban setting, in which the remnants of society have organized socially into like-minded, like-behaving clans (called factions).  As adolescents reach the age of 16 they are given an aptitude test to determine to which faction they are most dispositionally inclined.  However, at the sixteenth birthday they are allowed to choose the faction to which they desire to attach themselves for life.

The story plots (of which there are several) are weaved into and around this societal segregation structure.  Typcial adolescent themes are explored: dealing with authority, struggling to find identity, the emergence of romantic feelings, and the search for meaning and one’s moral compass.