I recently read Little Fires Everywhere by Celeste Ng (2017).  I rarely report on my fictional reads, but this one deserves note. 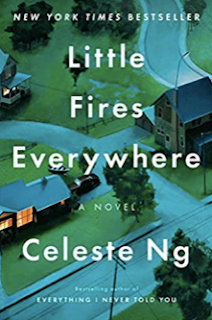 Ng does a magnificent job of character development (several of them, actually) while weaving a tapestry tale that touches on the messiness of family, of culture, of heritage, of values, of morality.  The contradictions that most of us struggle with along all those dimensions are laid bare in this work.

I love it when authors cause me to think about their book while I'm NOT READING their book.  Ng did just that.

This one is getting dangerously close to cracking my Top 10 Fiction readings.
Posted by nelsonwcoulter at 6/23/2020 06:31:00 AM No comments:

Leadership comes in all kinds of iterations and manifestations.

Leaders at all levels (in our families, in our houses of faith, in our social networks, in our communities, in our world) can learn much from the fails of leaders past.

Here's what failing leaders DON'T do:


History is littered with examples of failed leadership.

It is also ripe with examples of leaders who chose the paths of
Listening, Admitting, Forgiving, Honoring, Bridging, and Seeing.
None perfectly so, but always and persistently with betterness in mind.