The Audience Is Not Captive Anymore

The same thing is happening in education, at warp speed.  Historically, schools and teachers have had a captive audience in their respective communities.  That paradigm has shifted.  The delivery of academic content (math, science, English, and social studies) is now being automated and packaged in such a way that any person (regardless of age) can sufficiently and inexpensively learn any of those subjects, with nothing more than a digital device and an internet connection.

That reality begs the question – What then is the role of schools and educators? The best of both have always been focused on goals much more lofty than simply delivering academic content.  Now, however, any school or educator that sees themselves ONLY as content deliverers will find themselves going the way of all those manufacturing jobs – into irrelevance.

Guthrie CSD has rightly chosen to reshape our approach to educating children.  Certainly, delivering academic content is a part of that picture, but it is framed in conjunction with equally important and worthy intentions.  Through the Guthrie Graduate Profile (on our web site), the school and community of Guthrie have chosen to teach our children ways of thinking and ways of behaving, in addition to the academic subjects.  The Guthrie community assumes that our children stand the best chance of being happy, successful, and prosperous citizens if we can equip them with those kinds of future-ready skills.

Education Service Center Region 17 in Lubbock invited a team of Guthrie teachers and students to share elements of the work along those lines at their annual Technology Conference in Lubbock on August 15, 2013.  Guthrie teacher Aleshia Withers and students Kara Briggs and Aubrey O’Neal shared with the audience of 150 educators their projects centered around the school garden (known as Plantopia) and their interactions with adventurer Elia Saikaly who was climbing Mt. Everest last spring and communicating throughout that journey with the Guthrie students.  Guthrie teacher Darren Wilson and student Tito Contreras shared the features of the Black Box Studio in which students work on robotics, computer maintenance, video editing, and multimedia.  Contreras explained how he created his own “first album” of music which he mixed and edited himself.  Finally, Guthrie Virtual School teacher Summer Reel shared how Guthrie spreads its approach to education to every corner of the state of Texas through its online learning model. 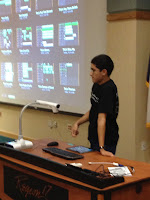 Guthrie CSD will launch its first day of school on August 26, 2013.  Classes start at 8:00 a.m. and end at 3:30 each day.  Details about activities and the school calendar can be found at the GuthrieJags.Net web site. The excitement is building, and the learning never ends.
Posted by nelsonwcoulter at 8/16/2013 07:26:00 AM