There's an old saying among those who farm:  "Usually, it's best to just plow around the stump."

When plowing the land one sometimes encounters a stump in the ground.  There is the strong temptation to just plow over the stump, to keep the progress going, to keep the rows straight and true.  STOP!  Not a good idea.  The stump usually wins. 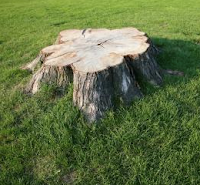 I suspect that is where the phrase "I'm stumped" comes from - when we encounter something/someone that stops us, that is insurmountably obstinate, that keeps us from progressing.

Like stumps, some issues and some people are simply intractable.  It's far better to work around them than it is to plow over them.  We can surely decide to plow over the "stump," but there's a high price to be paid - in damaged machinery, in time lost, in relationships impaired, in halted progress.

It is indeed best to "plow around" most "stumps."