Back in 1995 our country was mesmerized by the murder trial of O.J. Simpson.  During that trial, the news media seemed to pay attention to little else in the world.  They analyzed every word, every frown/smile, every point and counterpoint.  A prominent fixture of that constant analysis was the nightly talk show called Larry King Live on CNN.

A frequent guest on King's show was an attorney from Wyoming named Gerry Spence.  He was the epitome of eccentric.  He wore a buckskin jacket with fringe hanging from the sleeves, he had long and flowing silver hair, and he had an absolutely magnetic presence.  Spence also had a wicked wit.

During one of those trial analysis sessions King asked Spence about the courtroom theatrics of one of the attorneys that day, to which Spence replied, "You can say damned near anything you want to as long as you say it with a smile on your face."

That concept resonated with me then, and resonates with me still (almost 20 years later).  In fact, I have even included improving my smile (and laughter) power on my personal growth plan for several years.  I believe it's that important to my becoming a more effective leader.

I later read a book written by Spence titled How to Argue and Win Every Time (1996), and found it chock full of interesting and useful ideas about how to express myself in a convincing way. 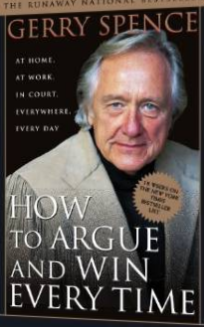 I think often of Spence's comment to Larry King about the power of a smile.